***Our beautiful Dinky crossed the rainbow bridge in November 2019. He will forever be in our hearts. ***

Blu Kaleidoscope, affectionately known as Dinky in the family is the son of Columbine.

Dinky was only 45g when he was born hence we call him "Little Dink". But this little Dinkster has proven to be a little fighter and proceeded to eat up everything that is in sight. Currently, hiis favourite treat is his mum's Hills TD biscuits which are almost the size of his jaw! We know that this boy is going to be a promising young stud just by looking at the way he eats! At 7 months of age he is already 3 kg.

Dinky with mummy Columbine in Dec 2008

Dinky was born on 15 May 2008. He is the progeny of Columbine and beautiful Shantinga Candos Carisma (Cosmo). Cosmo carries all the colours able to be produced in the Burmilla breed (Black, Brown, Chocolate, Blue and Lilac) and Dinky is no different. Dinky was DNA tested and we know that he too has the ability to produce all colours hence we have named him Blu Kaleidosope.

Dinky on the cover of NSWCFA Catching Up Magazine (Dec 2008)

Dinky is a beautiful blue shaded cat. Blue is a rare colour in the Burmilla breed as it requires 2 copies of the dilute gene to produce the colour Blue. Most of the time Blue Burmillas tend to be heavily marked but Dinky has a very even coat and the blue colour displayed is warm and not "steely" or cold so he is a very good "Blue". As you can see from the pictures the colour on his coat is very light, it looks almost as if he has a light sprinkle of grey dust on him and that is all.

We brought Dinky to his first show in September 2008. At a tender age of 4 months he won 2 top 5 placings out of 3 rings that day which was not bad for such a young kitten. He has been to a few shows since September and has managed to win a top 5 placing in every show that he has been to. His highest placing so far is a 2nd top 5 placing at the Highlands Cat Club show in October 2008.

In 2009, we kicked off the year with the Federal Kitten Show on 1 February 2009. There were so many beautiful kittens in that show and Dinky managed to take home 2 all breeds award - 4th and 5th Best Male Kitten. He was also awarded Best Male Burmilla kitten and 3rd Best Burmilla Kitten Overall by Therese Imboden Johnson.

We have high hopes for little Dinkster and trust that he will continue to do well at the shows.

And thank you for all the Dinky fan mail. I have told him what a gorgeous cat he is and that everyone is sending him love letters :) 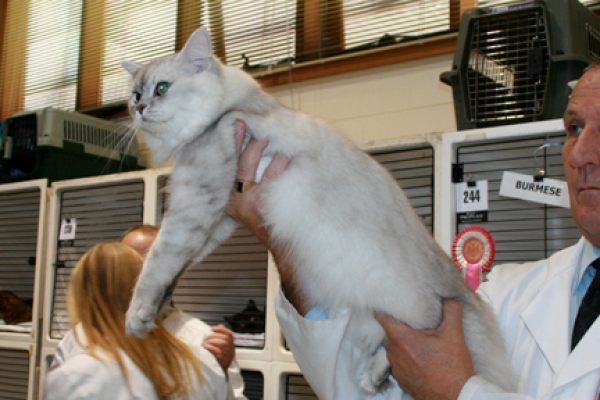 More of his adult photos HERE

The new Ultimates Nutrition Plus Cat Food is finally out in the supermarket. We are all terribly proud of our beautiful Dinky being featured cat. Dinky is also part of their major advertising campaign and is on www.ultimates.com.au, a number of magazines and even buses ( I saw him on a bus the other day and almost crashed into the car in front :))

If you have been waching TV lately you will notice a series of Toyota RAV4 - Get Outdoors ads. One of these ads feature a guy vaccuming his house and got his eyeball sucked out. Well if you take a good look, there is little Dinky in the background jumping from one chair to another and then looked really shocked when the guy's eyeball got sucked out. Here is the ad from Youtube. The resolution is not very good so this is best viewed on TV.